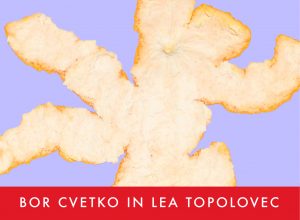 While enjoying tangerines together last winter, Lea and Bor had an idea. They used the tangerines they managed to peel in a single motion as the central theme of their zine. They were drawn to the variety and changeability of the forming shapes, with some even getting their own name. They wanted to instil this playfulness in the zine as well, which is why one can cut it up at the right moment and play a memory game.

Bor Cvetko (1998) and Lea Topolovec (1994) both trained karate and athletics in primary school. Now they are both students of Photography at the Academy of Fine Arts and Design. In addition to photography, they’re interested in other visual art fields, which they incorporate in their work. Lea recently completed a study exchange in Bratislava, and lives and works in Ljubljana. Bor spent a lot of time recently in nature, where he found a fresh source of inspiration. In the past, both have participated in several group exhibitions, but this is their first solo exhibition.