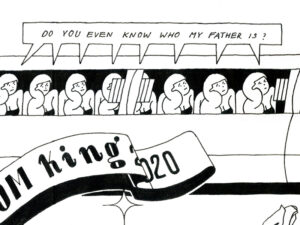 “Limouzine” is a visual wordplay with the words limousine and zine. It is a witty sneak peek into a premium limousine chauffeur’s day of business in the form of a comic. The accordion-type format used in the zine puts emphasis on the stretch car (limo) and the even more stretched day of the driver, as the full length of the zine when open is as long as a person with medium-length arms can spread them.

Agate Lielpetere (1995, Latvia) is a visual artist and illustrator, living and working in Ljubljana. She graduated in Arts and Humanities (Graphic Arts) from the Art Academy of Latvia. So far, she has held three solo shows in Riga and Ljubljana, as well as participated in numerous international group exhibitions. Interested in the irony of life, Agate claims her “bad sense of humour” runs in the family. 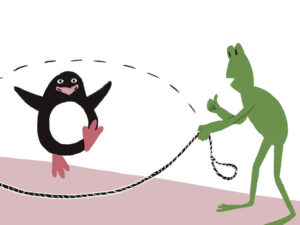 Frogs is an exhibition of humorous short comics by Dora Kaštrun, featuring two frogs. They spawned this spring at VigeVageKnjige. With their frog logic, they tackle the world through wordplay and wisecracks. They do everything people, pardon, frogs do. Go on holiday, gather mushrooms and lie in front of the TV. The eternally disappointed penguin Marko lives nearby, occasionally wondering whether it makes sense to wait for death. Luckily, he has the frogs at his side and they manage to keep him busy through their playfulness.

Dora Kaštrun (1994) is an M.A. student of illustration at the Academy of Fine Arts and Design in Ljubljana. She has been drawing her whole life – both for fun and for real. She is interested in illustration, comics and animated films. She has held two solo exhibitions and several group ones. Last year, she received the Goethe Institute award for the visual accompaniment to artist Marinella Senatore’s Song for Ljubljana, as well as an honorable mention for Best Album Cover at Tresk Festival at DobraVaga. Her graduation thesis animation Fish Soup was screened at the Animateka Festival. 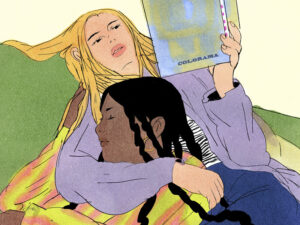 The Berlin-based Art Press and Riso Printing Studio Colorama is presenting an exhibition of the complete Colorama catalogue, featuring over 70 books of current comics and visual narration, at the DobraVaga Gallery during the Tinta Comics Festival. The Colorama Catalogue exhibition will present all publications from the past six years of publishing, as well as highlight the recent Clubhouse 14 anthology.

Clubhouse is an ongoing collaboration project curated by comics arstist and ilustrator Aisha Franz and Johanna Maierski (Colorama) – the guiding idea of it being to create a platform that brings different artists together and invites them to share their work and creative processes with each other. Each year, a group of artists is invited to collaborate on a comics anthology. The first three instalments happened in Berlin, but due to COVID-19 pandemic, the most recent publication emerged from a remote residency that was held via video calls and email conversations.

Colorama is a small art press and Riso printing studio, based in Berlin and run by Johanna Maierski since 2015. Their publications and exhibitions present contemporary artists in the field of experimental comics and artists’ books, as well as projects that explore speculative forms of narration, collective narration and alternative knowledge production. The studio understands publishing and printing as an artistic, collaborative practice and a democratic tool to participate in artistic and political discourses.

Colorama focuses on giving access to knowledge and networks through residency programs, teaching and consultation, continuously contemplating their role as a publisher and teacher. They are part of a wider community of publishers and printers that believe in para-institutional learning, equity and autonomy.Colorama believes that walking upright with a like-minded individual loosely holding your hand will sharpen your thoughts, strengthen your practice and soothe your self-doubt – resulting in something new, exciting and rewarding.

This website uses cookies to improve your experience while you navigate through the website. Out of these, the cookies that are categorized as necessary are stored on your browser as they are essential for the working of basic functionalities of the website. We also use third-party cookies that help us analyze and understand how you use this website. These cookies will be stored in your browser only with your consent. You also have the option to opt-out of these cookies. But opting out of some of these cookies may affect your browsing experience.
Necessary Always Enabled
Necessary cookies are absolutely essential for the website to function properly. This category only includes cookies that ensures basic functionalities and security features of the website. These cookies do not store any personal information.
SAVE & ACCEPT
error: Content is protected !!